Those of you who follow indie crowdfunded superheroine comics like Kamen America, Patriotika, Arachna, or Firebitch may also be aware of
the ongoing title "Flying Sparks" by conservative Hispanic science-fiction and comics writer Jon Del Arroz. I have the first two volumes.

It follows the adventures of a college student Chloe who has a secret superheroine identity as Meta-Girl (flight, super-strength etc)
and her troubled romance with Johnny, who runs a coffee shop but secretly delves into organized crime, and has electrical powers.
This latest issue #5 brings the threat of interdimensional reptile aliens as well as a super-powerful villain.

Issue 5 was meant to be the final chapter in Meta Girl and Johnny's saga, but the stretch goal of $30K will ensure that it's popular enough for
at least one more entire story-arc go-around. That seems possible, as his campaigns have reached those levels in the past. Much loftier goals include a cosplay shoot and series of Meta-Girl movie shorts, but those are ambitious, so we'll see if those happen at all.

Check out the Kickstarter, and if the book appeals to you, back it early to encourage more production. I know the costume is of a more Golden Age style, and thus not quite as skimpy as the other heroines I've mentioned above (Del Arroz is of a more traditional values sort) but the book does have a sexy variant cover by the esteemed South African artist Sashi (who draws very cute ladies).

But then again, there are peril scenes like the one below. I love the way that the lizard men are reaching hungrily for her fit body in that tight costume - it almost has a Giga feel to its intensity, like something's gonna get ripped at any second. It'd be great to see that one re-created in the movie short. 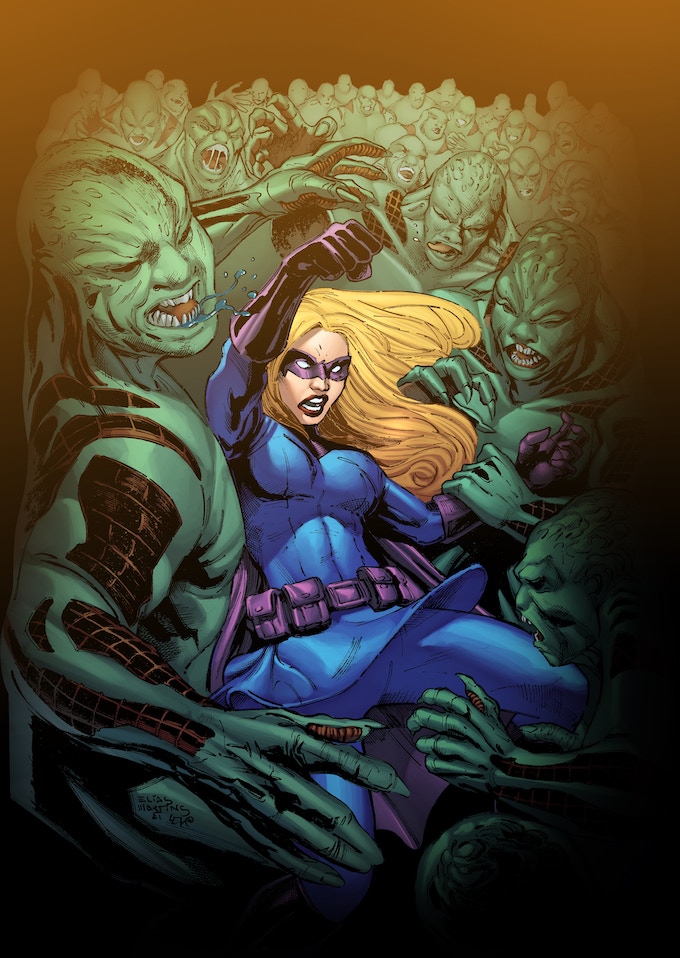 It looks interesting. Have you checked out the other graphic novels that are add-ons?
Top

Baralton wrote: ↑2 weeks ago It looks interesting. Have you checked out the other graphic novels that are add-ons?

Well, as I said, I do have the first two Flying Sparks graphic novels. I missed out and didn't get Vol. 3 and 4 but I suppose I could order those.

As for all the other add-ons, those are various other publications that Del Arroz is still keeping in print, such as the public-domain character Dynamite Thor.

The only other add-on that seemed to involve a "heroine" is the recent "Overmind" book which came out last year.
It's about a renegade A.I. (which I assume is called 'Overmind') that is hellbent on taking over the galaxy, but sexy spacewoman Ayla Rin
has to stop it. My question is: why is the book called "Overmind" when that's already the name of a prominent Marvel Comics villain?
You'd think it would make more sense to just call it "Ayla Rin: Book One" so that she can have more adventures stopping other antagonists
later on.
http://www.heroineburgh.com
https://www.youtube.com/channel/UCsaJNs ... h5aTsjnGxQ
https://twitter.com/Heroineburgh1
https://www.facebook.com/heroineburgh/
https://www.deviantart.com/heroineburgh
IG: @heroineburgh412
Top
3 posts • Page 1 of 1