I kept meaning to post about Scorpiana before on the previous campaigns, but I finally got to do it here.
What reminded me was a post from Cara Nicole about her cosplay cover for Scorpiana #4.

Some background:
Set in a world populated with colorful metahuman heroes and villains, Elena Santos, aka Scorpiana, and her sister Maria were abducted and suffered unspeakable experimentation through exposure to the mysterious substance called Quantium. It proved fatal to the many previous test subjects before them, but the Santos sisters survived! Initially left for dead, Elena awoke in a mass grave, hell-bent on revenge and determined to rescue her sibling!

Scorpiana's mission of vengeance continues in issue #4 as she and her allies move to confront Pluto Mohr, the mad scientist keeping Elena's sister Maria incapacitated. Just as he moves to dissect her alive, Maria awakens! What will this mean for her -- and for Mohr?

Meanwhile, Scorpiana and her allies Carter Maxwell, Shadha, and Crackshot storm Mohr's compound in an effort to rescue Maria. But Mohr has unleashed his most powerful defense yet -- Quantium zombies!!! This powerful mob attacks our heroes as they make their way onto the grounds. Will they be able to best these otherworldly maniacs and bring Mohr to justice?

TLDR: Scorpiana is a superpowered ultra-sexy Latina heroine whose costume is a skimpy black bikini with little red stripes, plus long gloves and thigh-boots. Created by Mike Shoemaker of Outpost 426 Comics, who is responsible for the bad-girl comics on labels like Aircel and Malibu featuring
Galaxina, Ultimate Strike, Tommi Gunn, Sheena of the Jungle, Razor (with Everette Hartsoe), and Bad Girls Go to Hell. Here's his website: https://cobraclutch.com/

Here's the link to the Scorpiana #4 Kickstarter. You can catch up and get add-ons from issues #1-#3. That's going to run about $94 for the 4 books
including shipping, so I'm going to need to pay down my card a bit to make it happen in a couple weeks. But if you can afford it now (or if just
want the #4 issue for $28 incl shipping), then jump in. Yes, I know crowdfunded books are more expensive.

One of the Scorpiana #4 variants: 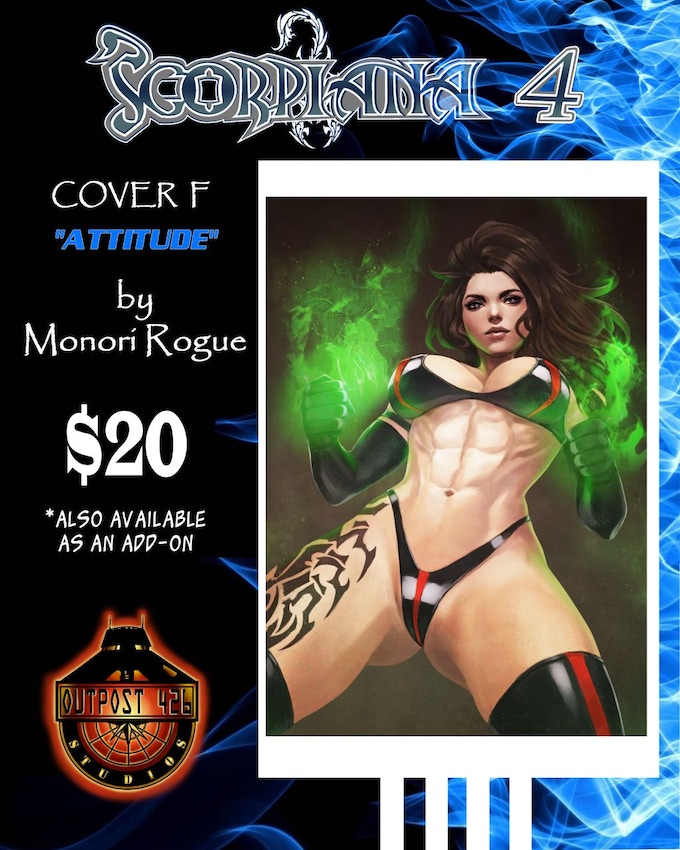 The three back issues with their variant covers: 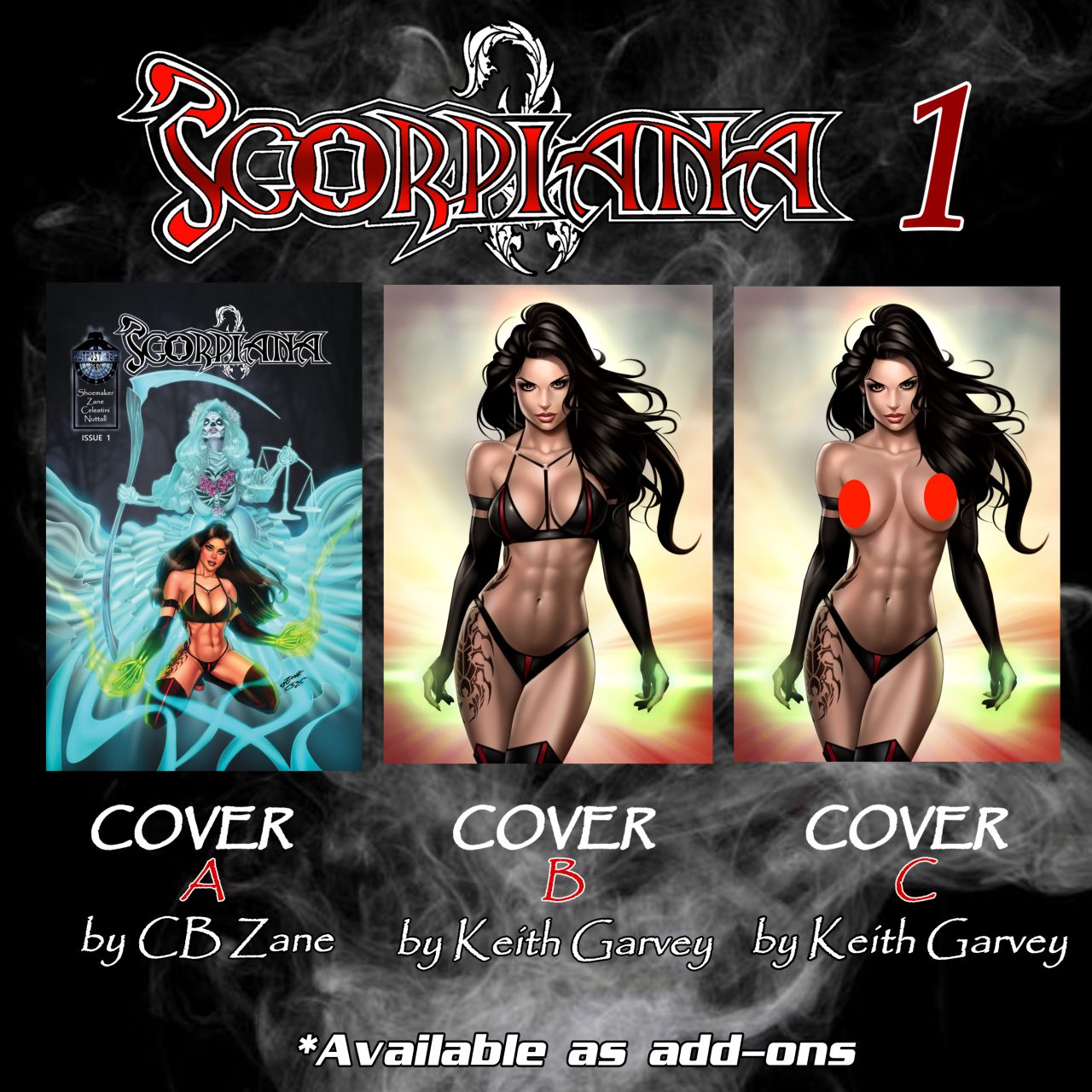 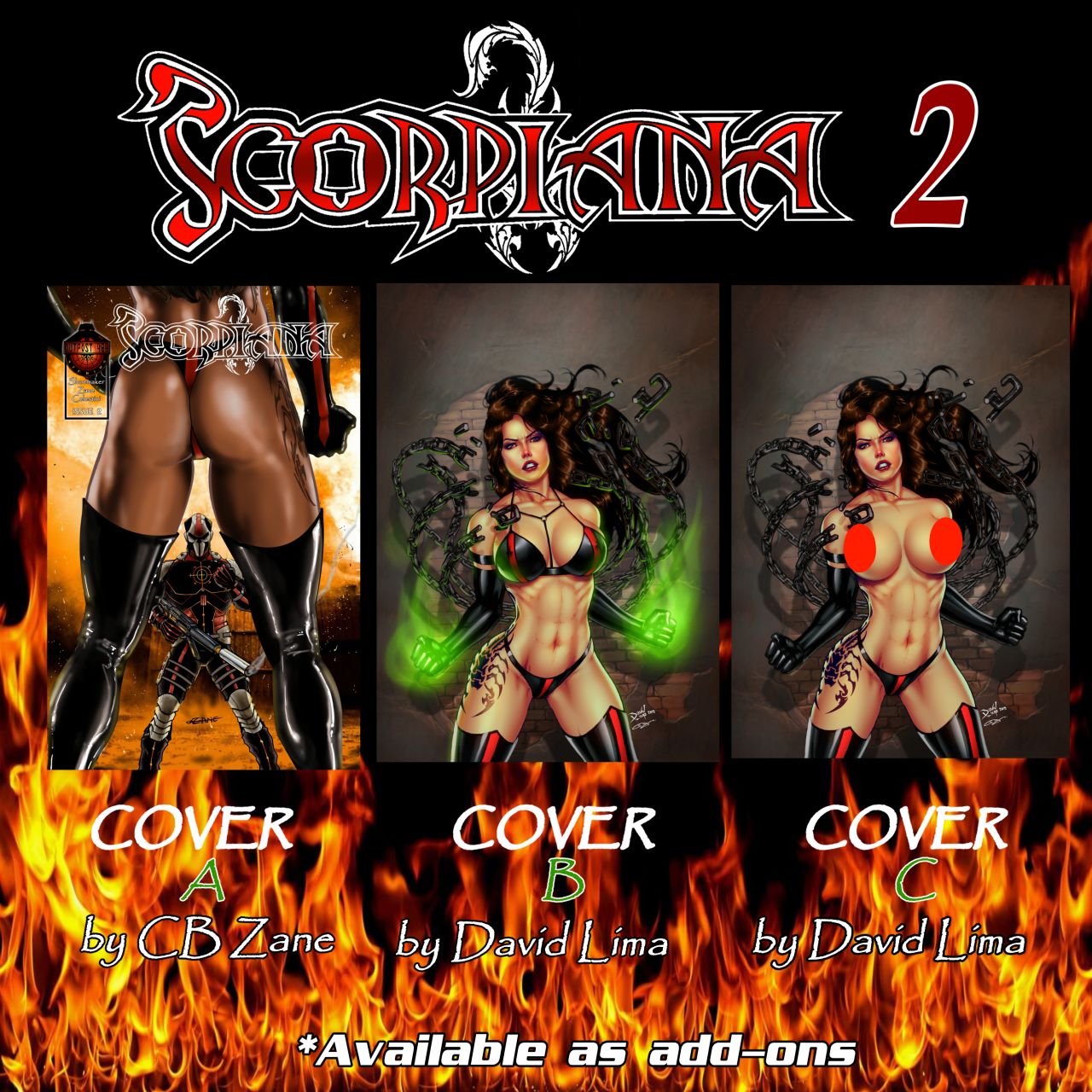 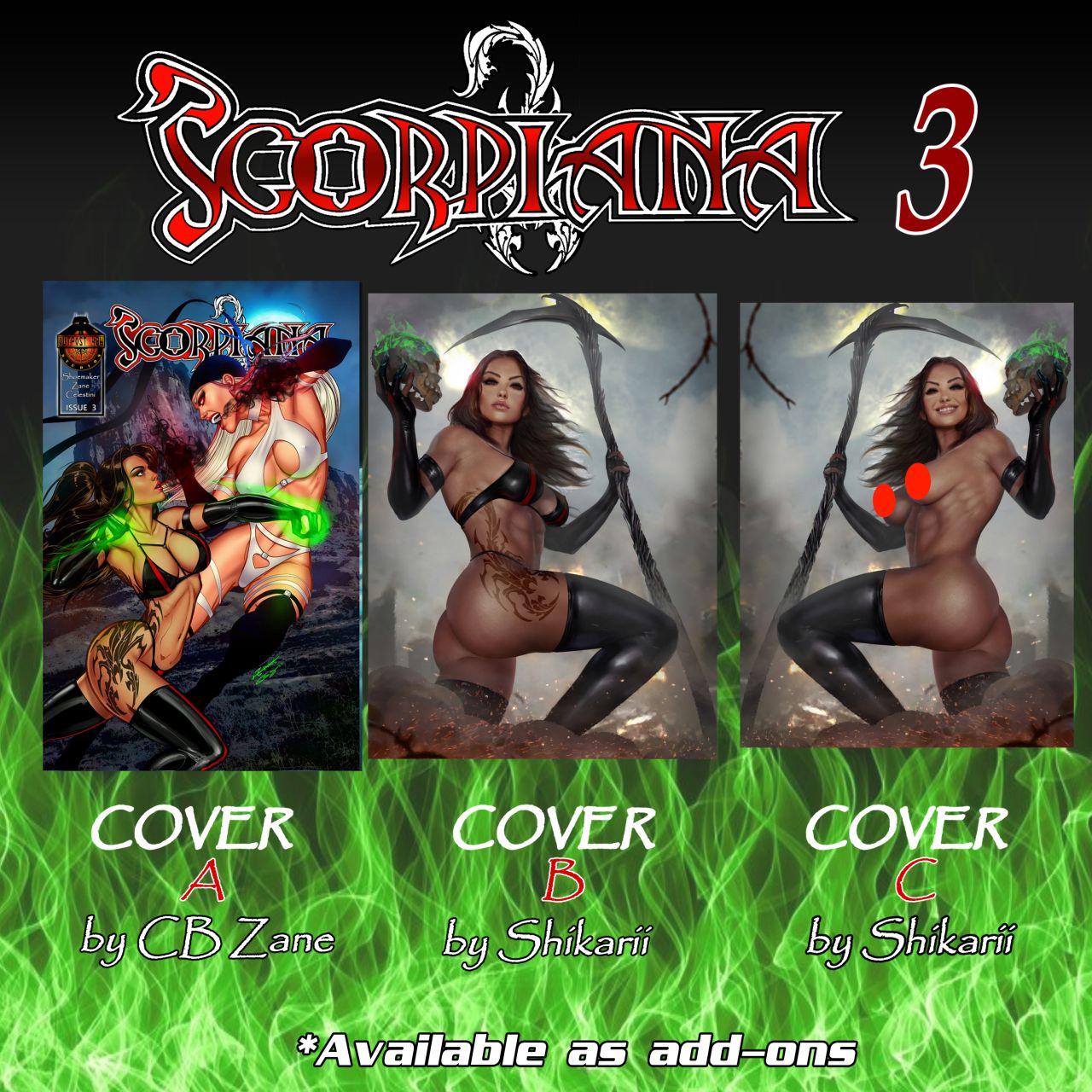 So, guess what? Back on Nov 5-6, I was in Akron Ohio at Akron Comicon with Heroineburgh, The Edge, and Beowulf.
We had a great time, sold lots of books, got lots of photos taken of Devana the Huntress (Casey), and all crashed together in a great spacious airbnb.

But more importantly to this thread: I met C.B. Zane, artist of sexy Scorpiana, as he was sharing a table with Tom Hutchison of Big Dog Comics (whose
hot heroine Critter I have enjoyed through purchasing her graphic novels).

C.B. had some nice titles he was selling through his imprint Outpost 426 Studios. I basically bought anything involving superheroines in skimpy outfits and tight spandex, and I wasn't disappointed by any of it.

There's Mighty Mite #1: a super-strong high school girl named Pressley who acquires her powers through a substance called Quantium.
She goes on various adventures, and even though the Mite has a very tight costume (ample bosom & high-cut leotard, showing off her muscular legs) nothing in this book would be out of place that teens & up couldn't read. Halfway through the comic, two of the stores adopt more of a cartoony style to their art (like Archie Comics) but it's still cute.

Black Rabbit #1 is a whole other kettle of fish - this is a mature book by all means. She's a criminal like Catwoman but gets her jollies by committing daring high-end crimes. Her successful commission of those heists results in her getting very turned on, which results in her getting herself off in a dripping warm bath, while imaging herself at the hands of a muscular naked black guy named Darius the Great (I think he's a stage magician),
Most of the book is sexual acts, and instead of the standard word-balloons, there is prose written all around the full-color drawings in a very tasteful manner (I've seen this done before in other sexy heroine books like Tarot Witch of the Black Rose). So, if your thing is a supersexy anti-heroine in a tight black rabbit costume rubbing her pussy to orgasm, look no further - the adventure starts here. I'd call this a rated-X book.

I also of course bought Scorpiana 1-3 directly from CB Zane. As I explained before, it's about a superpowered sexy Latina heroine who wears very skimpy costumes and battles against traffickers who capture innocent people (including her sister, Maria) to do experiments on them with 'Quantium'. This comic is chock full of incredibly sexy ladies drawn by CB Zane. Besides Scorpiana, there's Shadha; Maria herself; a cadre of sexy
SHIELD-style operatives in super-tight spandex including their leader Captain Monica Horner. There's also Scorpiana's old friend Kayla with the tight body and the short hair. And finally, there are appearances by two standard heroines: Mighty Mite and an unnamed long-haired redhead in a tight costume who says she's from "Georgia" (so maybe she's "Rebelle" or something like that - the book never mentions her superheroine name, which is the only disappointment in the series).

Between the action fighting traffickers, combat scenes between Scorpiana, Shadha and Crackshot, and going after the mad scientist who is conducting all the Quantium experiments (his name is Dr. Pluto Mohr), there are also some sex scenes. Scorpiana has no problem sleeping with
whomever is attractive: she starts out having sex with her driver/companion Roger, and then moves over to a three-way with Kayla and Shadha.
Everything is drawn for maximum pleasure display, but they don't go too far, so I'd say it stays in hard-R territory.

By the end of issue #3, we see the revelation about what happened to Scorpiana's captive sister, Maria, which leads to the cliffhanger for issue #4.
I hope I'll be able to get it soon from another convention where CB Zane is tabling, but if not, I'll probably order directly from him. Good stuff - this is some of the hottest bad-girl content out there right now.

Here's a photo of the Outpost 426 books I got in Akron: 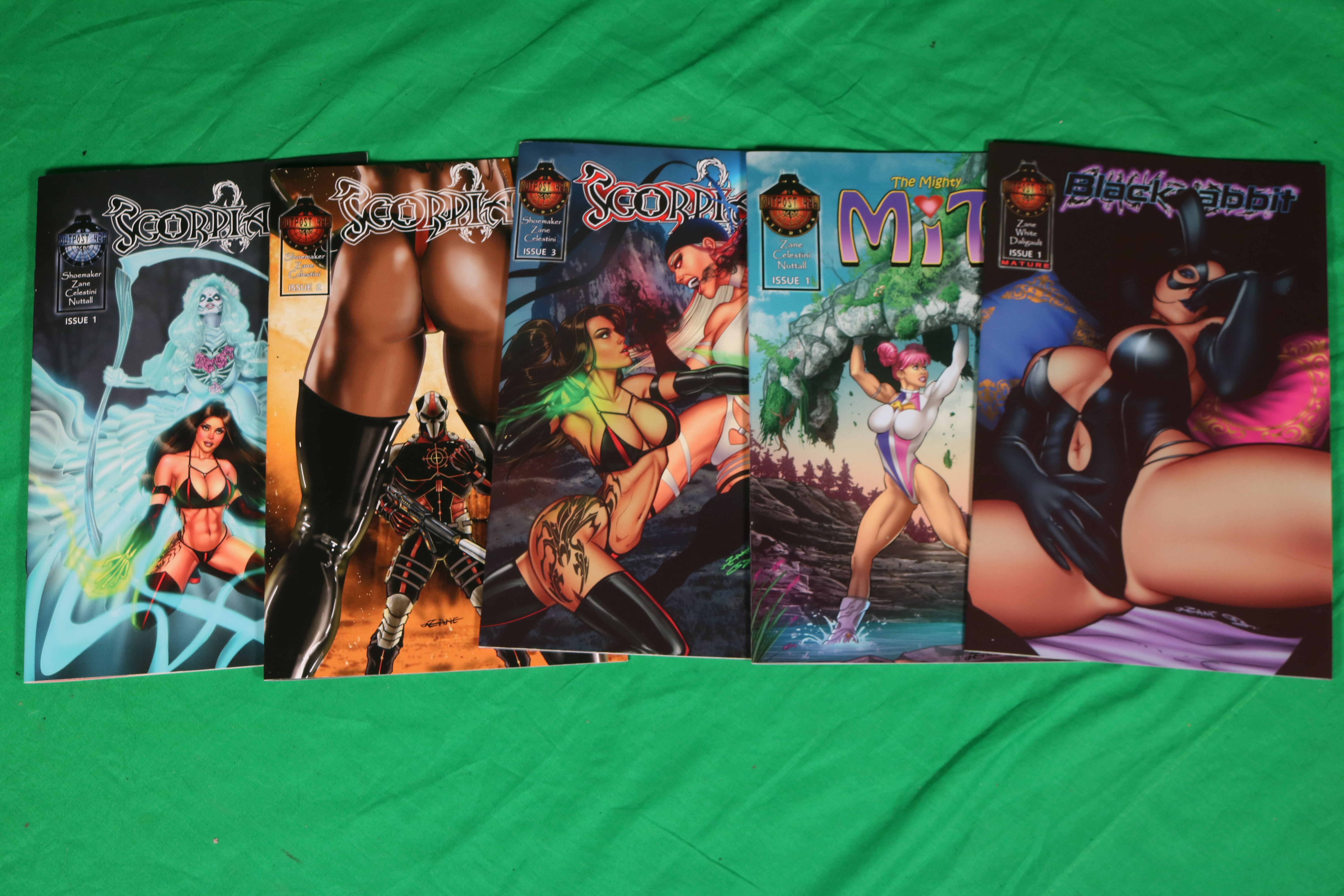