Hey all, it's been a week so I thought I would give you my take on the con this year!
This was actually a return to the con for me, 2020 - 2021 were both cancelled and I did not attend in 2018 or 2019.
When I arrived, I feel like I didn't miss a beat. Everything was immediately familiar and I reunited with lots of friends who I've made over the years; fans, models, producers, etc. It was like old times all over again.
The con itself has really progressed over the years. They're always adding new events and classes, there is an actual dungeon that you can play in, there is a Meet n Greet, pool parties, fan shoots, the Superheroine Showdown, lots to do.

Clips4Sale had a bigger presence this year and they were really helpful explaining all the new rules for creating and releasing content. They had the biggest space on the convention floor and they had staff on hand to answer any questions and to help new "creators" (As we're called now!) get on board. Very cool if you are thinking of starting your own brand or just feel like making videos from time to time. And it was all free or, at least, included in your ticket price!

This year was WELL attended. The hotel was completely booked. Lots of models floating around and I made a LOT of new connections. Im not much of a random picture guy and I respect their downtime so I didn't take a lot of pics in that regard but I have a lot of shoots in discussion in the coming months.

There were a lot of lifestyle-ers around this year, more so than in previous years. When I went to my first con in 2004, it was mostly bondage and lifestylers. But as more and more producers and models started showing up over the years, a lot of lifestylers stopped going.
That changed this year for sure.

But models were still the main focus as always. While some didn't make it this year and were definitely missed, it was nice to see Randy Moore and Diana Knight (both retired) milling about with Diana handling the Superheroine Showdown in place of George Perez who, as you know, left us this year in May. Christina Carter was there, Stacy Burke, a LOT of new faces which is always encouraging.

Not as many superheroines this year but sometimes that is hit or miss. I think it should be our mission to make sure more cosplay models make the convention next year!

But overall it was a lot of fun. Im glad I went, I was able to shoot some content and make a lot of new connections so, I want some of that to be a surprise haha! But if there is anything specific you want to know just ask.
http://www.hypnoticsworld.com
http://www.superheroineunderworld.com
http://www.heroinewrestling.com
"Have you ever seen a portal?"
Top 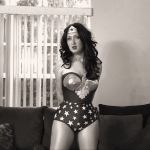 This year there were only seven superheroines on stage (the highest count was 27, in 2008) but a good time was still had by all.
Top

It breaks my little

that I still to this day have never been to this con, of all cons in the country...this one...most of the cons I go to do get Fetishy but nothing like this one. Glad you both had a good time!!
Top

batgirl1969 wrote: ↑3 months ago It breaks my little

that I still to this day have never been to this con, of all cons in the country...this one...most of the cons I go to do get Fetishy but nothing like this one. Glad you both had a good time!!

Shakeshift wrote: ↑3 months ago This year there were only seven superheroines on stage (the highest count was 27, in 2008) but a good time was still had by all.

Shakeshift, I just accidentally stumbled upon some of the sawn in half evil magician stuff, any chance of sharing some of that here? My God That guillotine really makes a girl weak in the knees!!!!
Top
5 posts • Page 1 of 1