It's time for the Comicon season once again...and Heroineburgh is ready with our first appearance of the year this weekend at Steel City Con in Monroeville, PA (Apr 8-10). We'll have our booth in the main vendors hall as usual.

Here is the approximate actress schedule for the weekend:

Marvin and I will be at our booth all three days (although I'll be leaving early on Friday about 4 pm).
Hope to see you there if you're around the area!

And to get you back in the Comicon Season mood, here's a lovely video from Bridget, who plays Arctica, walking around
at last year's Terrificon in Connecticut. Give her some likes. She'll be back there this year again, as well as at 3 Rivers Con in Pittsburgh and possibly some other events. Heroines Assemble! 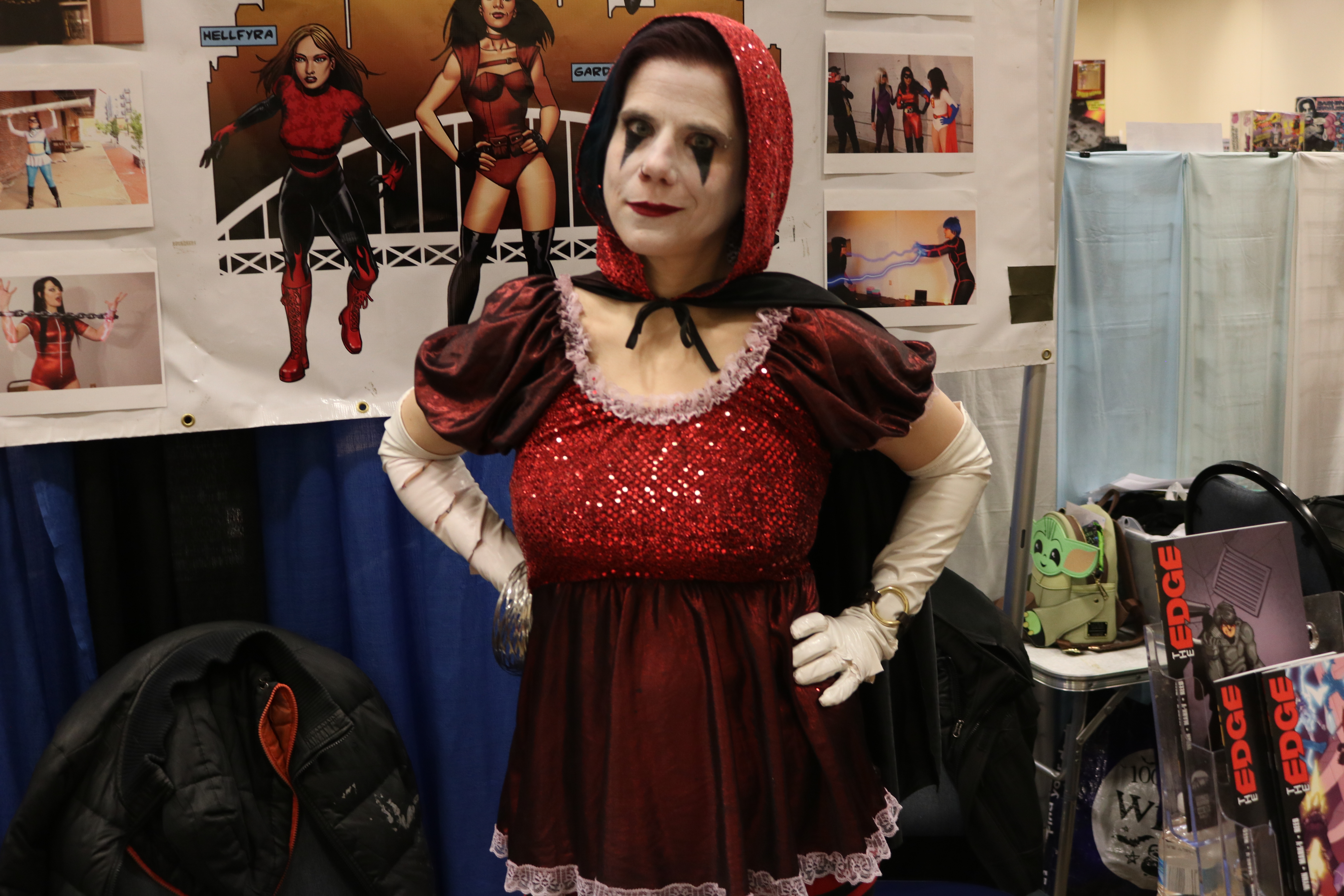 Solo shots of Heather as Cybrina (queen of cyberspace) at the Con. She was getting accustomed to the idea of walking around in a tight costume, and looked great. Heather is an awesome sci-fi fan - we had an hour-long discussion about The Expanse! 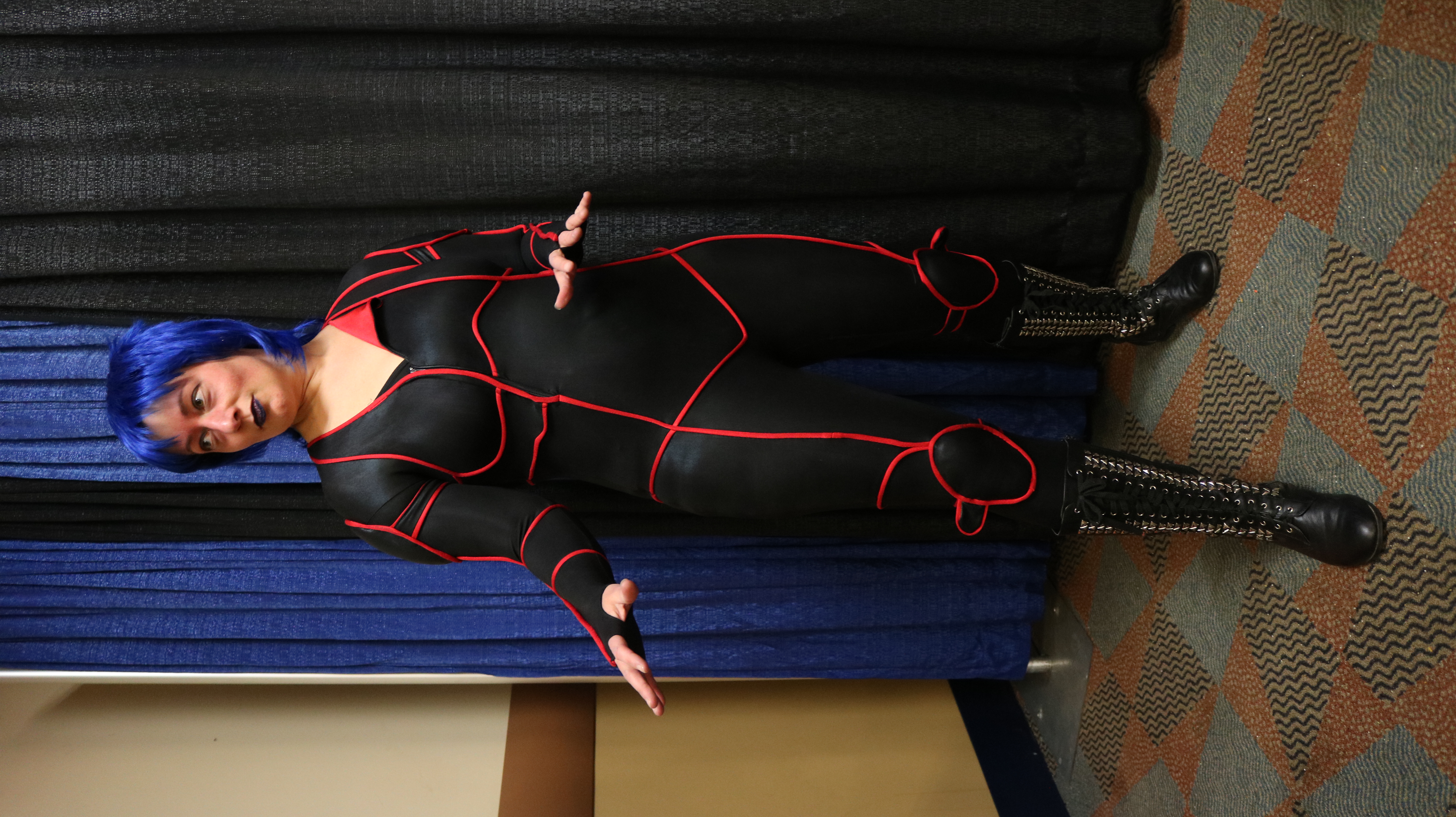 Also from Day 2, our interior artist Wayne Brown participated in the Charity Draw.
Here he is in action (with the pad). 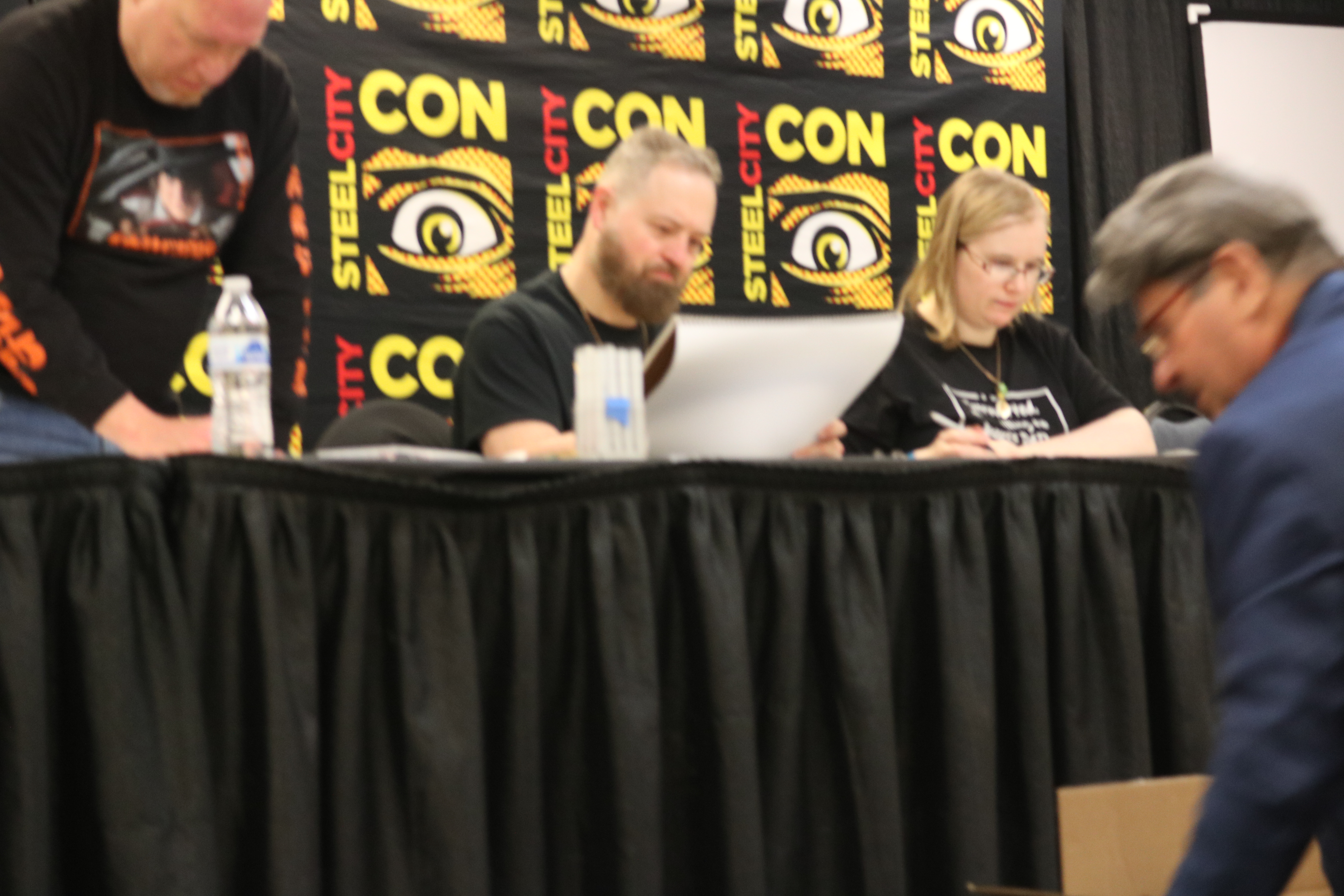 And here's one of the pieces he drew, a sexy Harley Quinn, which netted some money for the charity cause. 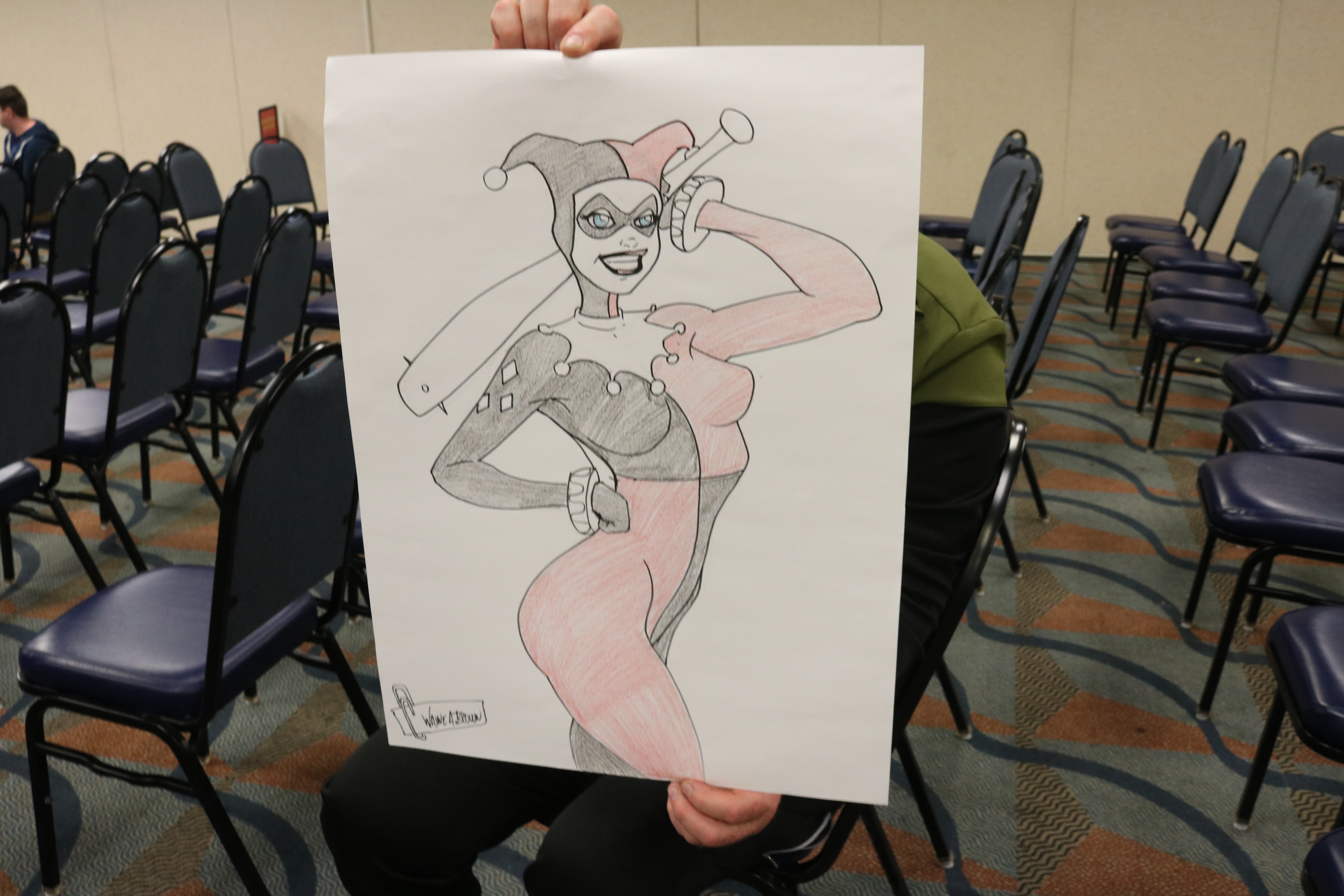 Steel City Con finished up yesterday with two of our actresses - Mesmera and Serpenta - participating in the cosplay contest
judges' panel.

Stacy (Mesmera) judged the kids' costumes. She was in her "Belle" cosplay at the time, but then changed into the Mesmera outfit
for the final three hours of the Con. Meanwhile, our new actress Jessica (Serpenta) took the stage and did a fantastic job judging the teens and adults. The adult costumes were amazing - a few of them took 300 hours to create! The only Western superhero entries were Lady Venom and Black Manta - every other character was either from manga or video games. 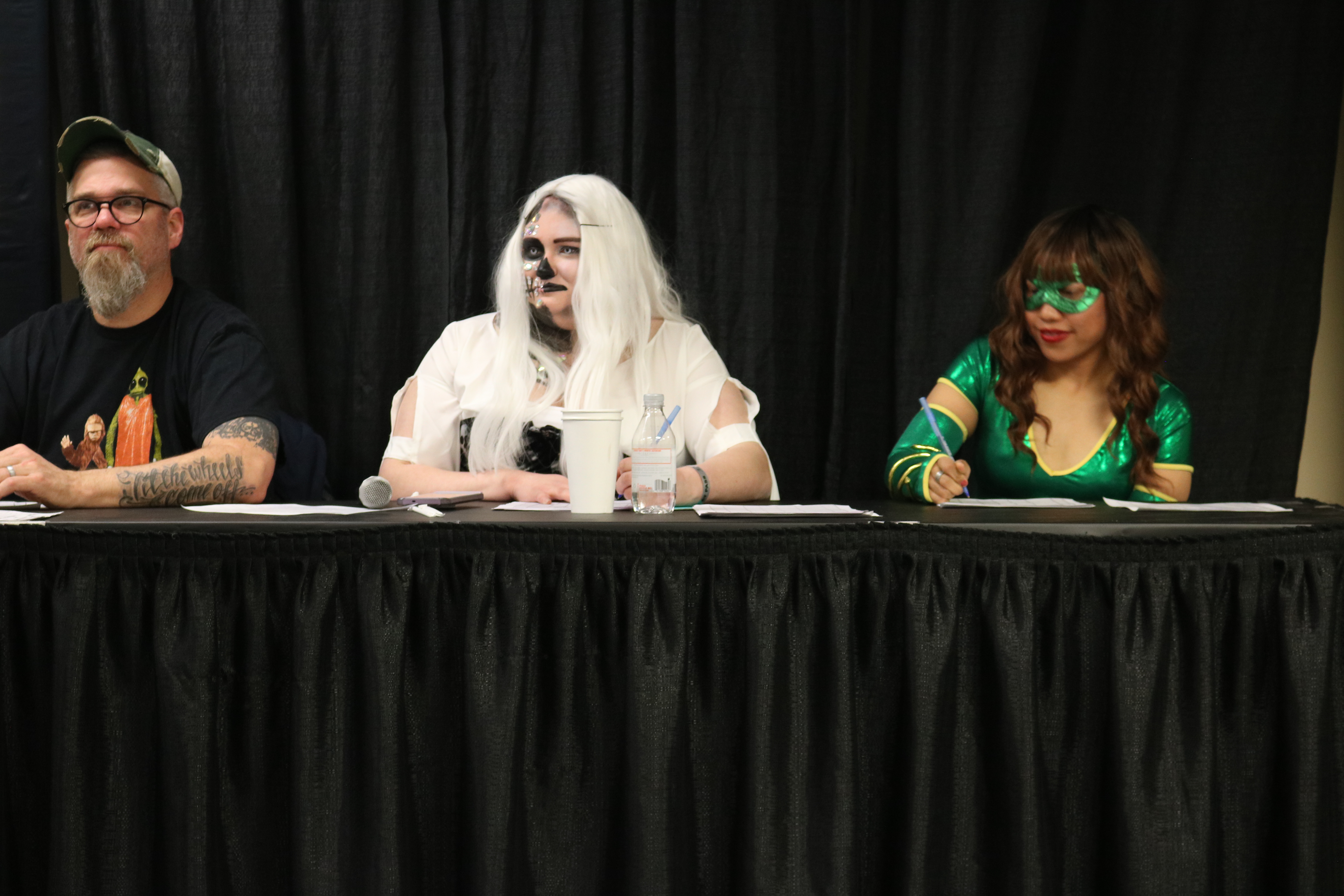 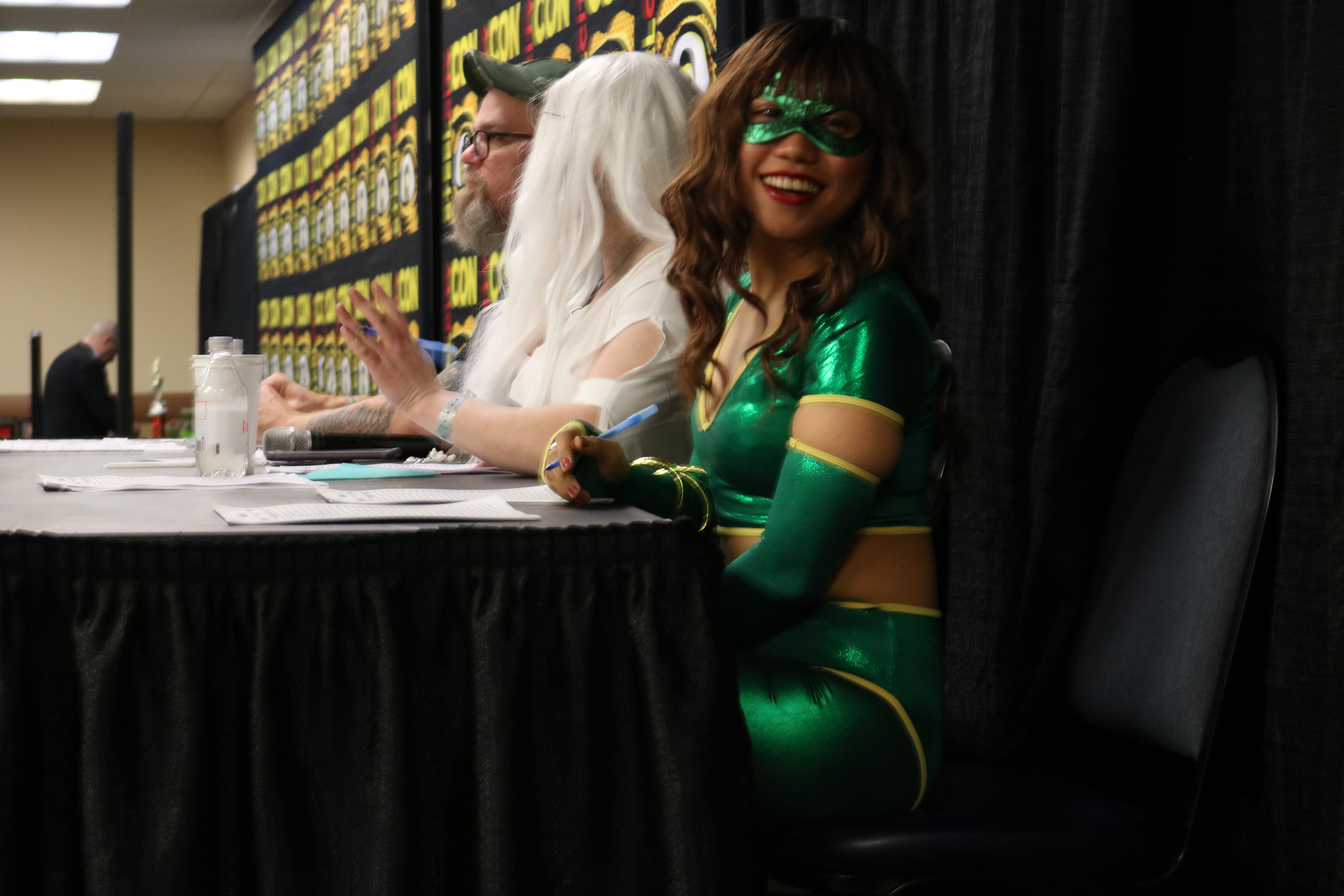 Mesmera and Serpenta did some supervillainess poses and a clip for Youtube in front of the Steel City Con backdrop. We'll be back at the next Steel City in August, but in the meantime, we've got Cons coming up in Beckley WV (Cause-A-Con),
downtown Pittsburgh (3 Rivers Con), Altoona PA (Sci-Vi Valley), Dayton OH (Gem City Con) and Uncasville CT (Terrificon).
And it looks like we might add a trip to Columbus OH in late May - should know more on that one asap!
http://www.heroineburgh.com
https://www.youtube.com/channel/UCsaJNs ... h5aTsjnGxQ
https://twitter.com/Heroineburgh1
https://www.facebook.com/heroineburgh/
https://www.deviantart.com/heroineburgh
IG: @heroineburgh412
Top

The Comicsburgh crew had an exciting weekend in Beckley WV at Causeacon! We participated in two panels, added two new stores (Fama's Comics in Beckley and Third Floor Comics in Nitro) and everyone at our table pretty much sold out of the books we brought.
One guy spent $64 to pick up two copies of every book on the table [one to keep signed, and one to read, apparently].

Lots of new fans made in southern West Virginia for Heroineburgh! (pictured: Marvin of The Edge and Grant of Beowulf).

One of the coolest things was that we had two groups of young cosplaying Con-goers (about a dozen total) show up to our second panel, which was a half-hour showing of Episode 20. Afterwards, all the kids who had seen the episode came back to our table and they bought two thumb drives containing all of Heroineburgh Season 1. True "superfans"!

(pictured below: Marvin of The Edge and Grant of Beowulf chilling at our table. I took the photo.)

and P.S. We are definitely headed out to Columbus Fanboy Expo in the last weekend of May. One of our characters will join the Comicsburgh crew, and we'll find out whom soon. See you in Central Ohio! 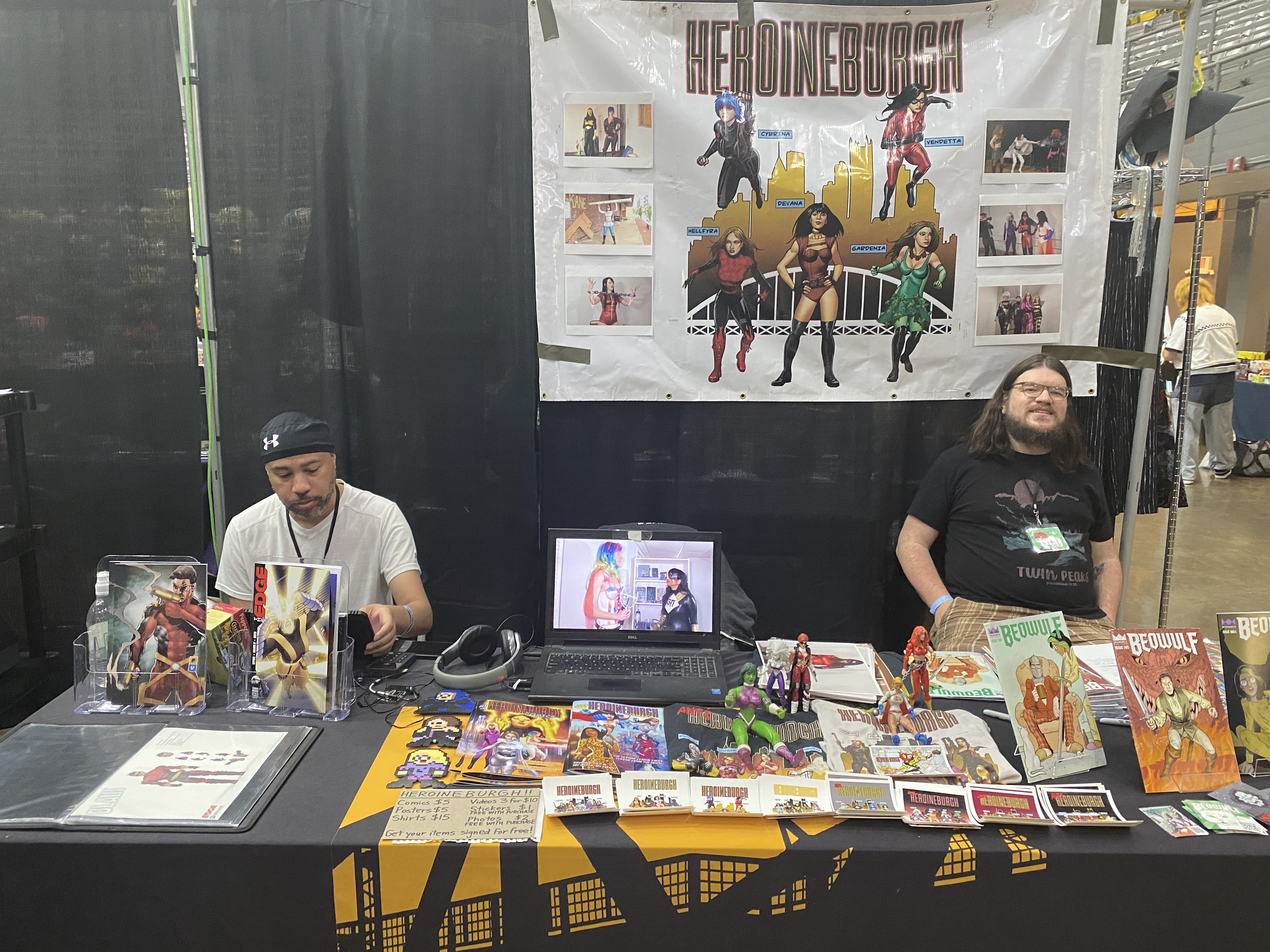 Making a strong appearance was the beautiful Vendetta - aka Mauricia, the creator of MusicMakerComix.
Everyone from the "Comicsburgh" crew (including Mauricia, and Marvin of The Edge) did quite well, with multiple interested fans
buying up a package of all seven comics that we had available! What a fun day yesterday! It was the inaugural Greater Pittsburgh Festival of Books (aka Book Fest), and the "Comicsburgh" group was only one of three tables of comics-related material who were given room to take part. (The other two were New Dimension Comics, who sell Heroineburgh at their shops; and Chutz-Pow! featuring Marcel Walker who does some of our back cover pinups).

Heroineburgh, The Edge (Marvin) and Beowulf (Grant) were joined by our new friend D.P. (Theme of Thieves) and by our lovely Heroineburgh actress Tiffany, who has her own dark historical fantasy novels (she plays Darbouka in our series). We were set up in an upscale mall food court in a complex called Bakery Square, along with about a dozen other book tables. Not only was the book crowd interested, but we caught the attention of many random shoppers coming from the restaurant gallery area. Lots of brand new fans were made, while we tapped a whole new audience.

We recently had "Comicsburgh" team shirts made. Here is Tiffany modeling one in a restroom selfie at the Book Fest. 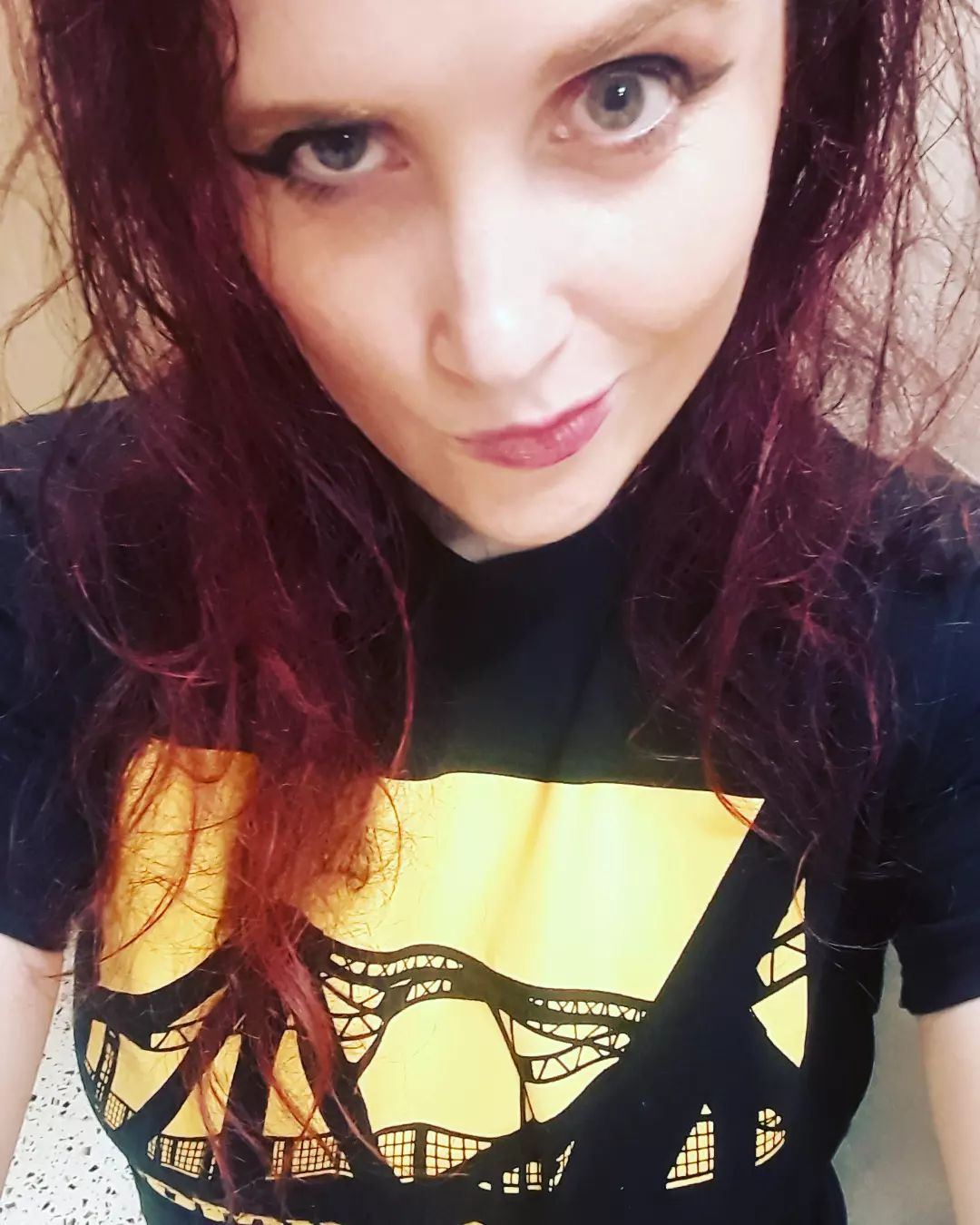 Tiffany's book display and the adjacent Heroineburgh table display. She-Hulk is guarding the publicity photos, which Tiffany signed
for the new fans. 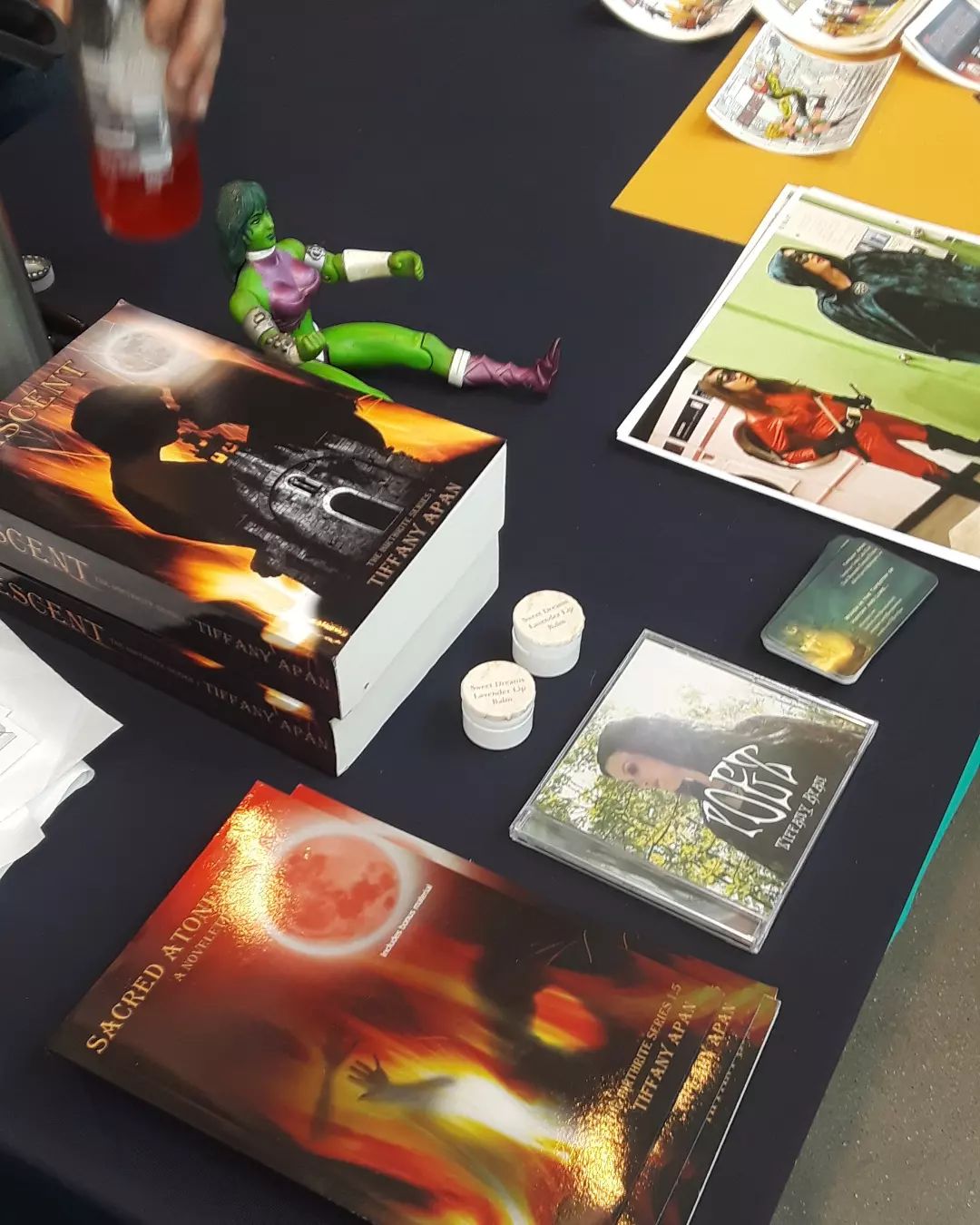 Then later that night, we hosted a concert across town for a goth band from New York City, and Christina's band opened the show.
As usual, she did an awesome job as the lead singer, and was dressed in one of her most gorgeous outfits which exuded a "1980s" vibe: red top with ruffles and a black cinching belt, very tight shiny black pants, and sexy stiletto heels. For those of you who didn't know yet, Christina is Poderosa (the Latina Powergirl) in our series. She's always on point!