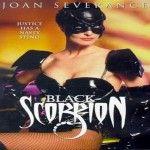 Kelly has left work and is making her way home when she hears a noise and looks around to find no one. She calms down and continues walking when she is startled.

to see a masked thug with a knife and demanding money from her; she attempts to flee, but he pursues her, tackles her, and shoves her against the wall.

She cries for help as he puts the knife to her throat and demands money or he will gut her like a pig.

The thug cries in agony as his hand is pulled from Kelly's throat, and she sees a woman dressed in a silk bodysuit, a black mask, and red boots and gloves.

She lifts the thugs hand up, and he drops the knife. She then kicks him, and he strikes the wall hard, knocking him unconscious. Kelly is terrified, and the woman comforts her.

and assures her it's over; she'll take her home; she assists her in getting up

They arrive at Kelly's house, and she thanks her for saving her and asks her name; she is Silk Babe, and she has to leave; Kelly waves bye the next day at work.

Kelly is sitting at her desk when her friend Holly comes in and sits down to work. Kelly tells her about what happened last night, and Holly is shocked.

Kelly then tells her that she was rescued by a strong and beautiful woman named Silk Babe.


Holly is grateful she was saved; she despises this town and the scum that pray on people; kelly despises it as well. Holly is called for a report; she goes,

kelly wonders if she'll ever see the silk babe again It's late at night, and Kelly is packing her stuff and heading home. She reaches for the entrance, then pauses and begins to worry. fearful that a masked thug will attack her.


She calms down and walks out, As she attempts to hail a cab, she hears something and turns to see a masked thug who wonders if she laughed last night when Silk Babe injured him.

Kelly is terrified and begs him to leave her alone. As he walks towards her, he takes out his knife and declares that he is not going to take her money, but rather her life.

he sees Silk Babe, she orders him to put down the knife and go, he runs at her.

Silk babe kicks the knife aside and punches him in the chest. she beats his ass down and chokes him out. Silk babe checks on Kelly and will get her away from him

When they arrive at her house, Kelly offers her a drink for saving her again, and Silk Babe accepts. As they walk in, Silk Babe loves her house, and she takes a seat as Kelly prepares the drinks. She gives her the drink and takes a seat.

They drink, and Kelly inquires about her crime-fighting efforts. Silk Babe is doing well, bringing down some of the city's scum. It's difficult work, but someone needs to keep the city safe.

She inquires about Kelly's career, and she informs her that she is an office worker its a boring job. She has a friend there named Holly, and she is a great person to hang out with while they drink. Kelly places her hand on silk babe's. hand


kelly expresses her gratitude to her for once again saving her life silk Babe smiles and tells her it was a pleasure, and they gaze into each other's eyes, secretly falling in love.

moving in and begin kissing; they stop for a few seconds before continuing to kiss; kelly takes silk babe's hand and leads her to the bedroom; kelly sits down.


Silk babe assists Kelly in getting nude and gently kisses her body down. Kelly enjoys the slow embrace. Silk babe positions her on the bed and stretches her thighs.

and begins to massage Kelly's pussy, then goes down and licks it, Kelly takes hold of the bed cover, loving every lick she gives her, silk babe slips her fingers

Kelly lies silk babe down, kisses her, and then licks her breasts. Kelly goes down and fingers and licks silk babe's pussy.

Kelly has something she wants to use, so she opens her drawer and takes out a  strap on silk babe is excited for it

She stands there watching as Kelly puts it on and says, "What do you think, silk?" Babe crawls sexily towards her, embraces it, and begins to gently lick and suck on it.

Kelly loves watching her work it silk babe lies down and kelly gets between her legs and gently inserts it into her and fucks her Silk babe moans in delight as Kelly goes nice and deep, then flips silk babe around and begins fucking her doggy style, which silk babe adores.

Kelly lies down while Silk Babe climbs on top and starts to ride it slowly, then quickly up and down. Kelly feels her hot sweating body moving quickly.

Silk babe really liked it, and Kelly enjoyed it as well. Silk babe needs a shower, and Kelly points to where it is. Silk babe gets up, finds a towel, and will return.

She enters the bathroom. Kelly closes her eyes and takes a nap, unaware that the masked thug is sneaking in. When he hears the shower turn on, he notices Kelly lying there.

He sneaks up beside her and captures her; she screams for silk, babe.

The masked thug takes a cloth from his pocket and shoves it in Kelly's face; she struggles and passes out; he drops a note on the bed and carries Kelly out; silk babe comes in, drying herself off, and wondering where Kelly is.

She comes across the note and reads it. Kelly is in the hands of the masked thug, who tells her where she can save her silk Babe is furious and rips it up before walking away. Kelly awakens bound to a chair.

When Kelly looks around and sees the masked thug come in, he gags her and takes out a ray gun, telling her to enjoy the show while he hides. Kelly sees  silk babe

walk in, she sees Kelly, and tells her she's saving her. Kelly tries to yell that it's a trap, but the masked thug leaps behind her and zaps her she feels her powers slowly drain

He zaps her a couple more times and enjoys watching her slowly fall down.


He grabs her and punches her in the face, knocking her across the room. The thug takes the gag out of Kelly's mouth and asks if she's enjoying the show.

She cries and begs him to stop hurting her, he laughs. Silk babe tries to fight him, but she is too weak, so he starts to beat her face and body, causing her excruciating pain.

He kicks her around the floor as she falls on her hands and knees.

As she tries to stand up, the thug steps back and runs, kicking her so hard that she rolls across the floor. As she lifts herself up, the thug grabs her and pulls her up.

and strips her naked and sends her to her knees to suck his dick, he grips her head and forces her mouth down on it harder, and kelly begs him to stop.

He picks up silk babe and shoves her on the couch, bent over, and fucks her.


doggy style  As Kelly watches in shock, he turns her over and fucks her in the front, fucking her pussy hard, hoping kelly enjoys seeing this.

He then raises her leg and fucks her in the side, then shoves her to her knees, rubs his dick, and blows his load over her face, and she falls down defeated.

The thug grabs her hair and drags her over to Kelly.


The thug wonders who Silk Babe is, and she yells no when he removes her mask. Kelly is shocked to see her friend Holly. The thug laughs and shoves  silk babe to the floor.

He goes over to get the rope silk babe, who slowly sits up and tells Kelly that she is sorry the thug binds her hands and feet and sits her down, and that he will be back for more fun. Kelly struggles.

and she begins to untie her ropes, she finds a bat


She tells Silk Babe that she will take care of this, and she hides as the thug comes in, furious, and shouts, "Where the hell is Kelly?" As he looks around, Kelly sneaks behind him.

and strikes his head, making the thug dizzy, Kelly strikes him again, knocking him down, Kelly prepares to strike again when the thug hits her abdomen and strikes her face  she falls down she struggles and

sees his knife on the table and crawls the thug tries to get up.

As the thug goes to grab her, Kelly takes the knife and sticks it in his leg. He screams and steps back, and Kelly grabs the bat and strikes three times in the face.

The thug collapses to his knees and spits blood; he looks up at Kelly and threatens her he is going to kill her; Kelly tells him don't think so scumbag, and strikes him hard, knocking him unconscious.

Kelly binds his hands and legs and checks on Holly, who is in a critical condition. Kelly unties her ropes and helps her up, telling her it's over and that she can call the police.

and arrange for them to pick him up Holly thanks her and apologises to her. Kelly assures her that all is perfect and kisses her, and she is relieved to know that her friend is a hero. she helps her walk out of the place the end.
Top
1 post • Page 1 of 1