Arcaide's Revenge- The VR Battle of Wonder Woman and Supergirl

Arcaide's Revenge- The VR Battle of Wonder Woman and Supergirl

Wonder Woman, aka Cali, crawls away in absolute terror until she is pulled back by her attacker! She manages to stand but YOU punch her out to a full KO!

WonderCali and Supergirl, aka Lydia Vengeance, are sitting with their arms tied overhead while wearing VR headsets. “Why are they in bondage and VR” you say?? They’re fighting each other in virtual reality to really test their wits! That’s right! Wonder Woman Versus Supergirl! WonderCali punches SuperLydia in the stomach, over and over, gaining 100 coins each time! And SuperLydia feels every single ounce of it in her VR headsets! The two are find out what revenge REALLY feels like all in virtual reality!

SuperLydia is so weak from her barrage of belly punches that she can’t even fight back. YOU get a nice long view up her super skirt while WonderCali beats her up even more! SuperLydia rolls her eyes as she she wobbles in place, and WonderCali winds up for a MEGA blow to her face! POW! All goes to slow motion as SuperLydia flies to the ground in total KO. Wonder Woman WINS!

Round TWO. WonderCali is left under SuperLydia’s control this time! SuperLydia tightens SuperCali’s cape around her neck and she becomes so weak that you get a nice long look up her wonder bodysuit crotch and into WonderCali’s rolling eyes. 25 Coins to WonderLydia for every airless second! Until... SuperLydia sends WonderCali to full KO!! 100 Coins! WonderCali wakes up though... so SuperLydia winds up for a head punch... that makes WonderCali’s head EXPLODE!

SuperLydia takes off her VR headset and walks over to WonderCali who is still all tied up! Looks like SuperLyda won this Arcade Revenge!! SuperLydia puts a red ball gag in WonderCali’s mouth and then takes off her bodysuit and gropes her tits!! Her revenge isn’t done yet though! Time for some forced O with a hitachi! GAME OVER for WonderCali!! Time for a rematch! Will SuperLydia lose this time? You bet! Together they lose multiple times with even worse punishments! 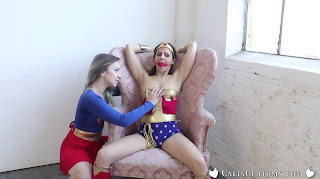 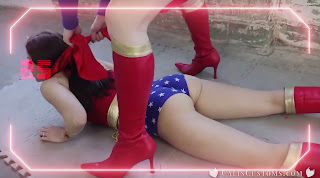 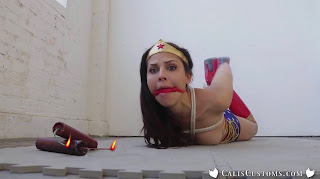