Superheroine Video Reviews By The Fans!
Forum rules
Create One Thread For Each Video Title.
In the Subject Line, put the title of the video, followed by the production company, or producers name.
Rate the video out of 10 at the bottom of your post.
Your review must be constructive. Tell us why you liked it, or why you didn't.
3 posts • Page 1 of 1 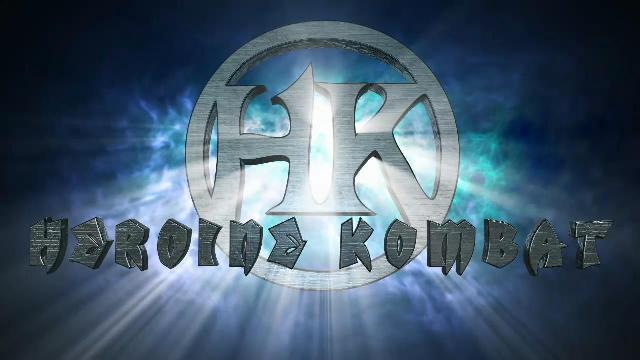 Plot: Heroine Kombat…the high-stakes gladiatorial game of the future is back for another round of colossal close-range full-contact combat. Today’s death match: the super-charged villainess known as Thundra is ready to unleash her electrically enhanced abilities on newcomer Skyfox, a pacifist superheroine with strong telepathic abilities.

Skyfox has no desire to fight Thundra, but Thundra makes it crystal clear that there will be ‘no retreat and no surrender’ in this match. With Thundra’s every attack getting more aggressive with each blow, will Skyfox be able to reason with her opponent? Or will she wind up another ‘fallen super’ like those before her?

Whatever the situation, one thing is certain: once you enter the ‘Doom Ring’, there’s no escape…and most of all, no return…

Quick Pick (Thoughts on the Film):

Cross the Line Productions has a very impressive array of superheroine fight vids on their site and I must say, Heroine Kombat is my favorite of the series! As usual, warriors of both genders (be they normal or super-human) get to test out their wide-array of abilities against heroes and villains in a quest for superiority! And this time, director Logan Cross decides to mix things up by pitting a pacifist against an anarchist to see which side will prevail: the one who uses the least amount of violence or the one who uses the most brutality.

But as usual, the battles in Heroine Kombat are to the death and victory is determined by one thing: the combatant who still has a pulse in them! 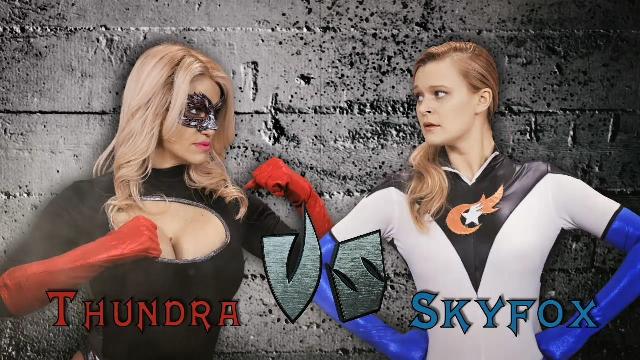 -Logan once again has an excellent set for the combatants to do their ‘dance of death’. Plenty of space for the models to move around and do battle with each other.

-Audio was fantastic and the actresses voices could be heard loud and clear up close as well as afar. Excellent sound effects for the blows and the use of super powers also.

-Blonde beauty Kristy Dowe’s performance as Thundra was phenomenal! Thundra is vindictive, brutal and totally out to get her opponent Skyfox. She enjoys causing her opponent pain and suffering and she really lets the fur fly in this battle. Hell, she even punches poor Skyfox across the face after Skyfox helps her up off the ground. I gotta admit, Kristy’s performance in this is right up there with her portrayal of villainess Twisty when she fought against superheroine Shadow in another one of Logan Cross’ cross-over stories. 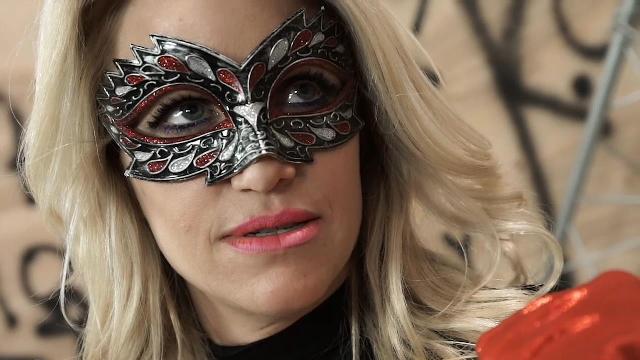 -Gretchen Stoll gave a very impressive performance as pacifist telepath Skyfox. Gretchen looks so innocent in this story and I’ve seen her play a villain at least a couple of times in Logan’s productions. But here, Gretchen plays a superheroine who wants to talk instead of fight. And while she does take some nasty blows from Thundra, Skyfox she doesn’t take them lying down: Skyfox defends herself and puts up resistance, albeit she tries to be gentle and not get too aggressive with Thundra during the fight. 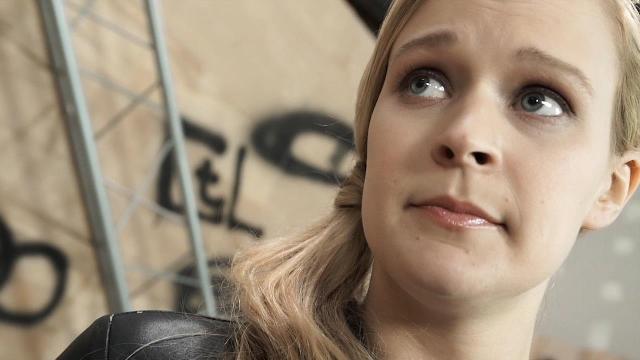 -Loved the outfits that Kristy and Gretchen are sporting in this, particularly Kristy’s. I’d really like to get my hands on her costume the most.

-Impressive camera work and angles to capture the action up close and at a distance. As usual, Logan does some fancy editing with the fight scenes, particularly when Thundra tries to attack and they make it look like Skyfox has super-speed to predict and dodge where an attack will come from on Thundra’s part.

-Lots and I do mean lots of blows are exchanged in this vid. Punches (from left hooks, to right crosses), kicks to the face, cunt blows, sleeper-holds and so forth. Kristy spends most of the vid dealing out the punishment to poor Gretchen in a one-sided beatdown and she fights extremely dirty in this fight, even going so far as to kick Kristy while she’s down.

There’s even a scene where Gretchen is down on all fours and Kristy proceeds to hold her and kick her in the face over and over again! She even pushes her booted foot on Gretchen’s face and that really had me wincing. I felt so bad for Skyfox in this fight and I just kept telling myself, ‘oh please don’t let Skyfox lose this fight like this, please!’ 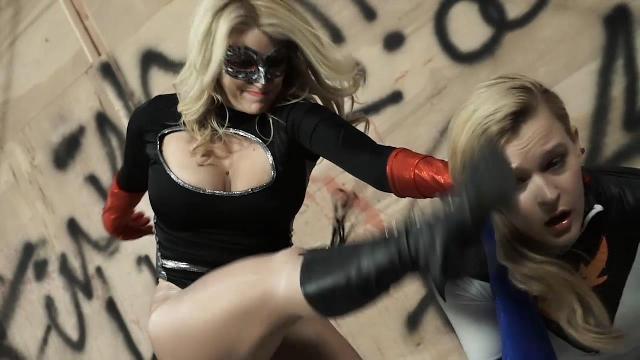 During the second round however, Gretchen does try to fight back and the tide turns in her favor through sheer luck. There was a part in the fight when Thundra has Skyfox against a wall and is pummeling her senseless, but as she winds up for the final punch, Skyfox dodges and Thundra ends up breaking her hand when she punches the wall!

*That's the thing I love about the Heroine Kombat productions…the writers always find a way to play with the outcome of the battles.

-Fight choreography was very impressive for this production also.

-Loved the special effects they used when a defeated super ‘revives’. That is so cool how they put that into effect!

-There’s some snappy exchange of dialogue between Skyfox and Thundra after Skyfox manages to knock her down:

Thundra (disbelief): How did you beat me?

Thundra: I don’t believe in luck.

Skyfox (smugly): Yeah, because I kicked you in the face!

-The third round of this fight, the gloves really come off for the combatants and neither one holds back, especially Skyfox since she knows that her *life* is on the line. Both beauties cut loose with their abilities (Thundra teleports around the room striking Skyfox and then early on, Skyfox tries to use her telepath abilities to make Thundra cease her acts of violence against her).

-Very creative fatality for this fight. Won’t say who gets their ‘just desserts’ but it left them in…free-fall.

-Hmm. A few…they didn’t let Thundra and Skyfox unleash their abilities on each other early enough, they just waited until the third round.

-Also, there wasn’t enough use of super-power usage in this. I wanted to see Kristy throw some thunder bolts or call lightning down from the heavens.
It would’ve been nice for Skyfox to use her telepath abilities to force Thundra to do things to herself like beat herself up or have a moment of regret for past misdeeds. Sadly, these abilities don’t get shown in this production.

-The fight dragged out a little bit in this…that’s one area that Logan has gotta concentrate on speeding things up on for future productions.

Diagnosis (What could be done better)

-Let the combatants unleash their abilities on each other. Logan has excellent visual effects at his disposal so I’m sure he can whip up some good projectile attacks or abilities for the fighters.

-Don’t let the fight drag out too long and also, cut back on the speed up and slow-down effect during the fights.

-Some battle make-up would be good for next time…let them spit up blood or bruise from a blow. I mean, if they’re supers they should be able to heal up fast from an injury that’s dealt to them.

Well, I must say that I was impressed by this vid but it did have a few sour moments to it. None the less though, it delivered the good and kept me entertained and I truly enjoy what Logan has put together with this work of art. Heroine Kombat is a game of life and death and only those with the ‘will to survive’…will leave the ‘doom ring’ alive.

*Definitely a vid worth taking a peak at. See it here at: 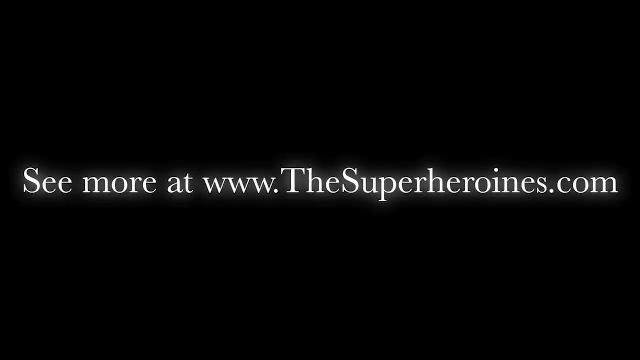 'Underestimate your enemy in battle, odds are, you won't live to see another one'
Top

Re: Heroine Kombat- Thundra vs. Skyfox (Cross the Line Productions)

Here's some more screencaps from this bare-knuckle beatdown: 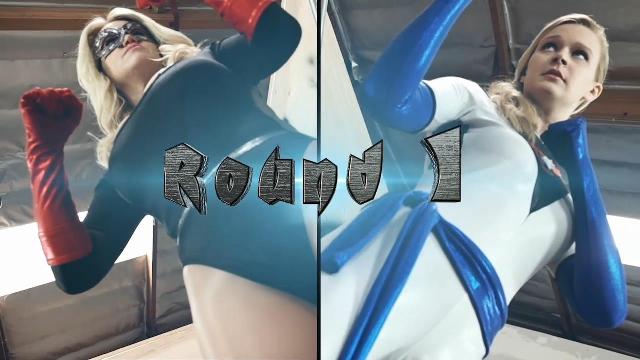 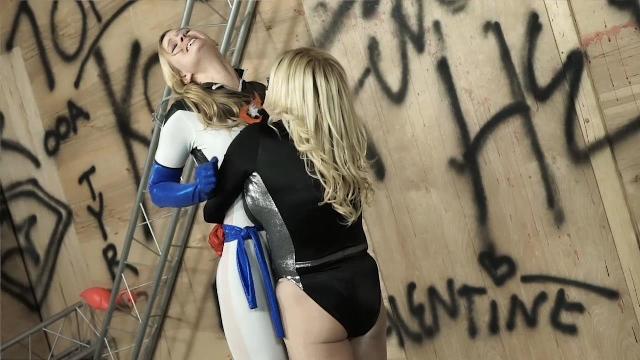 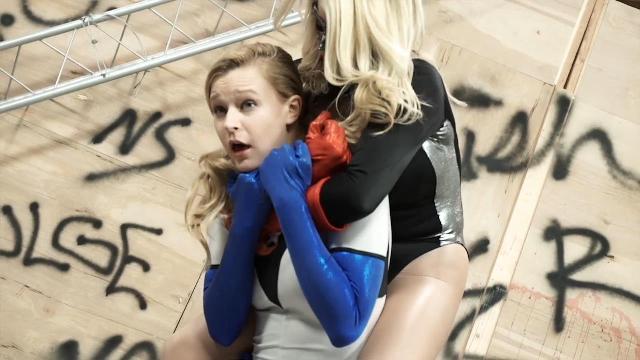 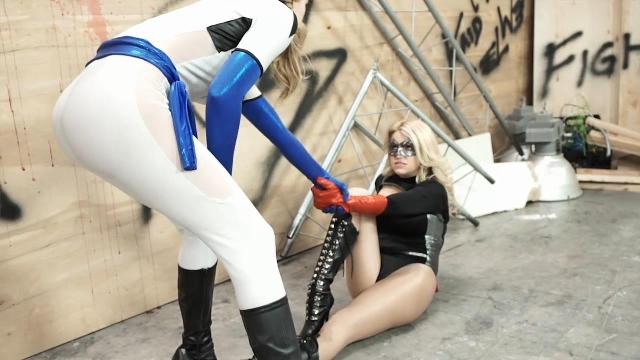 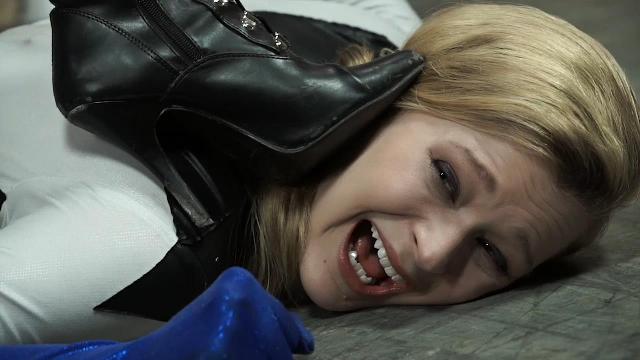 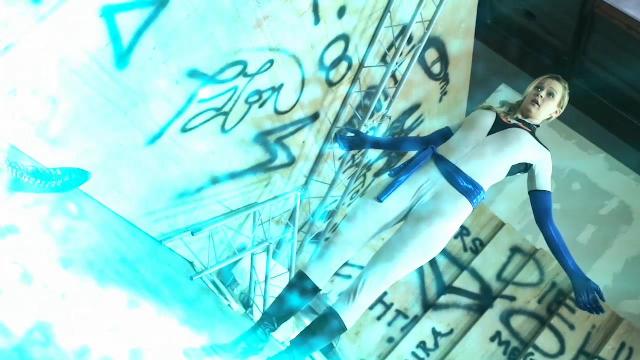 'Underestimate your enemy in battle, odds are, you won't live to see another one'
Top

Re: Heroine Kombat- Thundra vs. Skyfox (Cross the Line Productions)