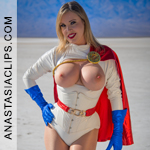 Released for the first time as one full movie! 45 minutes for $24.99
(this movie was previously released as part 1 and part 2 but never as a full)

Starring: Karlie Montana as Spider-Girl and Anastasia Pierce as Venom

Synopsis: May Parker (Spider-Girl and the daughter of Spider-Man) is beautiful, charismatic, bright and a popular student. <br><br>Like her father, she has the ability to sense weak point in her enemies and possess an acute Spidey Sense! But today, that precious Spidey sense is NOT working and she doesn't realize that someone is close by... She will quickly get captured and tied up by the Super-Villain Venom. Venom has shape-shifting abilities and decided this life time, to come back as a curvy brunette... and also her hybrid DNA can not be detected!!

Venom doesn't hesitate to control and threaten Spider-Girl right away. Being who she is, Spider-Girl is her worst enemy and must be eliminated once for good!
Venom will display her Alien Symbiote - an amorphous extraterrestrial parasite to make Spider-Girl comply but things are about to take a turn.. when Spider-Girl think of something unexpected!!!

BUT things are about to take a turn.. when Spider-Girl manages to use sonic waves to render the super-villain frozen and unable to defend herself any longer... She will find herself frozen and it will be Spider-Girl turns to get revenge!!

Book a custom video with Anastasia!
Lots of Love, Your Wonder Amazon
Anastasia